How to create age groups / divisions / pools and assign teams

Written by Felix Boehme
Updated over a week ago

Divisions are a PRO feature. See how to upgrade.

Think of divisions in our system as separate levels of play or age groups – there is no cross-division play.

We don't currently have the concept of conferences and divisions as it exists in American leagues like the NFL or NHL etc.

If you need this functionality, check out our friends over at Diamond Scheduler.

You can further sub-divide divisions into pools (aka groups). These pools also behave as separate during pool (round robin) play, but can be combined into playoff brackets within their respective divisions.

Any teams you want to combine into one knockout bracket need to be in the same division – they can be in different pools within that division.

Playoffs can be seeded from different pools/groups within a division, but not across divisions. 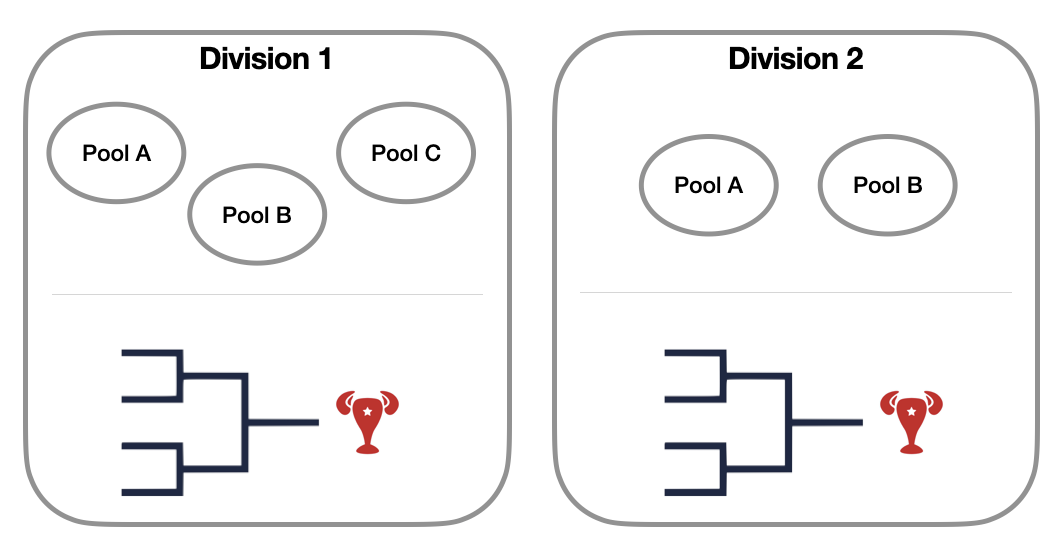 Should I use divisions or separate schedules?

The main reason to put divisions on the same schedule is to allow the scheduler to distribute fields/times across divisions.

If your divisions don't share time slots – i.e. each division has it's own dedicated fields and/or times – you probably just want to put them into separate schedules. This keeps things simpler as you won't have to worry about setting up constraints to keep each division on it's dedicated fields/times.

How to add/remove divisions 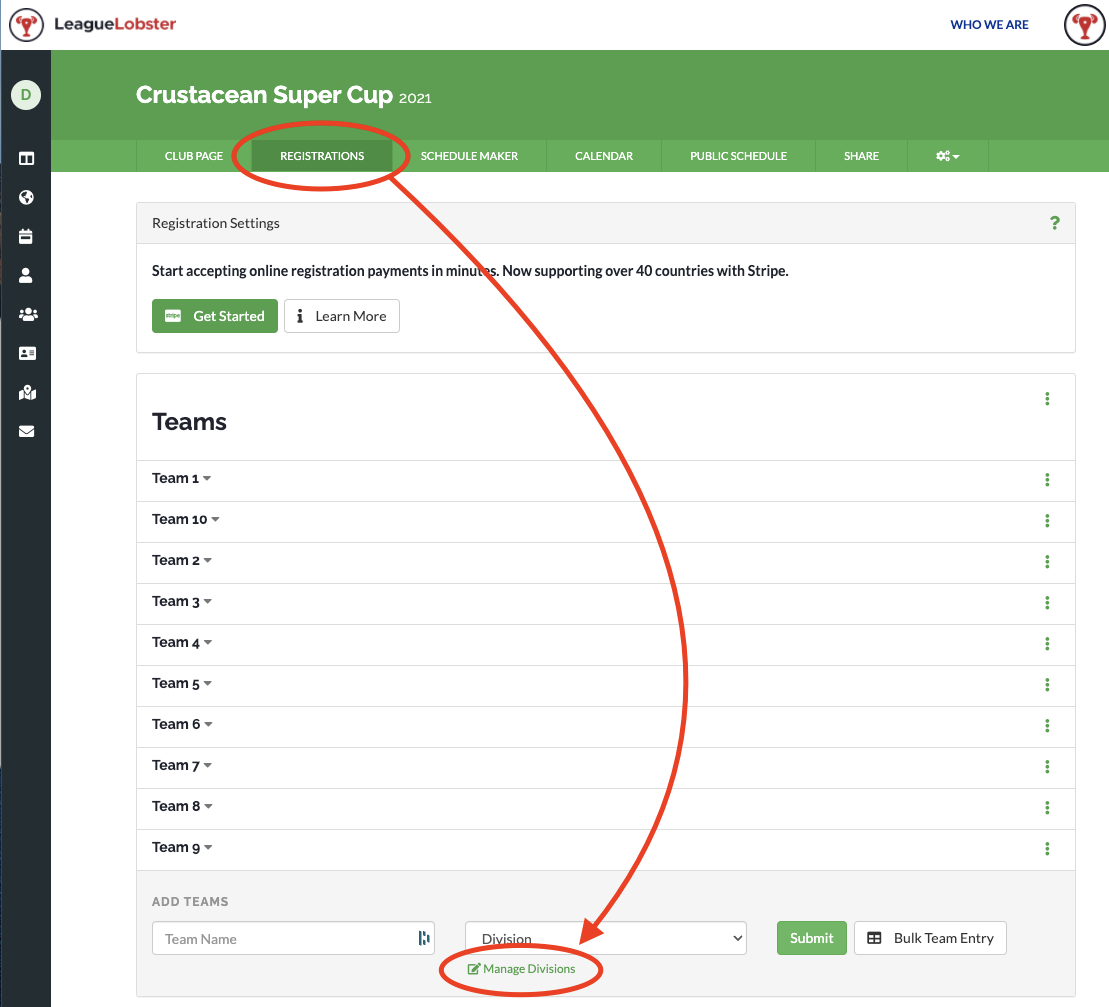 To add divisions, click Manage Divisions on the REGISTRATIONS tab, enter a the name of the new division and hit save. 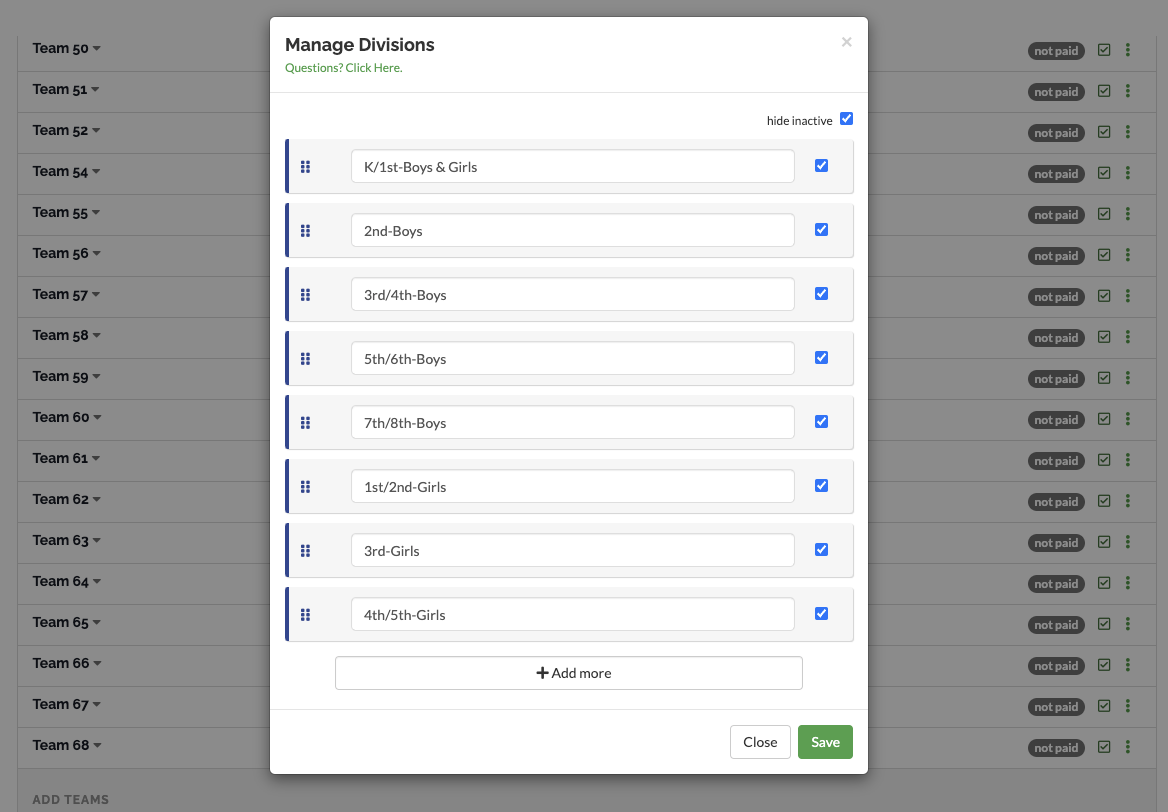 The checkbox on the right lets you include divisions you've created in other seasons.
Caution: Renaming a division will change its name everywhere it is used.

Drag and drop to re-order your divisions.

To delete a division, in the Manage Divisions dialog, erase its name and submit.
Note: if the division is used in another season, it will not be deleted (so you can safely try to delete any divisions you think you don't need).

How to put teams into divisions

Now, as you add new teams, you can select the division from the dropdown.

To change an existing team's division, click on its division in the list of teams and select the new division from the dropdown.

You can also drag and drop teams between divisions (and pools) on the Schedule Maker tab under Divisions.

How to make pools (groups)

To create pools, click the Create Pools button on the Schedule Maker.

Enter the number of pools you want to create for each division and click Save. 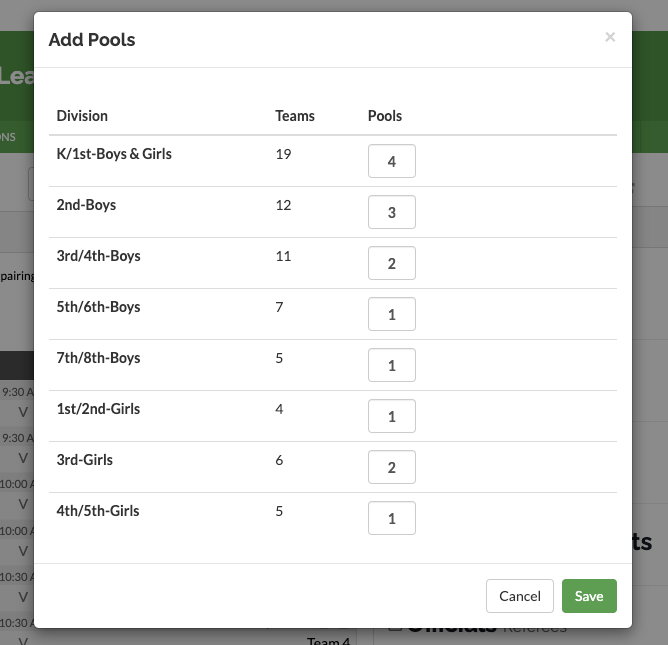 You'll see the pools under Divisions.

You can drag and drop teams between pools to change the assignment.

Did this answer your question?